skip to main | skip to sidebar

I Can Do This

I am calling today's blog "I Can Do This" because—more than anything—this is what I have been telling myself from the moment I was strapped in for my MRI.  As I disappeared inside that enormous machine just past midnight a few weeks ago—knowing I would not be coming out for another four hours—I breathed out and opened my eyes.  A mirror just above my face was supposed to be angled so my view would refract into the open room, taking away the anxiety of claustrophobia.  Something was not set correctly (I guess) and the only thing I could see were my own eyes looking straight back at me.  I was trapped deep in the recesses of a million-dollar piece of medical equipment.  No way out.  I had a buzzer to press anytime I wanted out (which would mean starting all over) but I didn't use it.

I looked into the eyes looking back at me and said, "I can do this."

One tumor and one emergency surgery later, I now find myself with a rebooted brain. It's the same mind I have always had with the same memories, but everything is different. At first I was physically disoriented—dizzy to a point where I could not stand up—but now my challenges are purely mental.

My entire life before my surgery I felt like a little person inhabiting the space inside my skull.  The little alien from "Men In Black" or the rat in "Ratatouille" are good metaphors. I was my mind only, and the rest of my body I trained to do things and feel things to look real. From an early age I remember that sensation of teaching my body to follow instructions as I picked up clues from other people —

By reading how others reacted to me, I used my intellect to construct a way to fit in seamlessly. I felt like a fax copy of a person the whole time, being clever enough to act a split-second ahead of things so as to pass by unnoticed amongst the flesh-and-bloods.

Now that my tumor is gone, I feel real, and it is overwhelming. Whereas things before seemed like a series of corridors and familiar doors I had set up, now it is like swimming in an open ocean with possibilities in every direction.

"Are you ready for this?" MJ asked me this morning. She had been keeping a keen eye on me for weeks, and she already knew the answer.

She put me in the car and drove me to rehearsal. I am many weeks, perhaps even months, away from returning to my life as a performing classical musician, but my new music group (who has replaced me in the meantime) thought it would be helpful if I play two notes on a harmonica for a modern piece coming up in a while. Just being on a stage with musicians—something old and familiar—might be a good thing for healing, a reminder that there are other safe places in the world besides the security of my couch.

On the way to rehearsal, MJ encountered a maze of detours as unexpected road construction pushed us farther and farther off course.  For a mind like mine so dependent on rational order and symmetry, the experience of not being able to take a straight, familiar path from point A to point B was jarring.  I got suddenly irritated and anxious.  I was trapped in a car, far from home, with no back-up plan.  We were doomed.

We pulled to a stop. If MJ and I were the type of couple who ever fought, this is where it would have taken place.  But we don't ever fight, so we didn't.  But I was frustrated and disoriented.  I closed my eyes.  I wanted to shout that we should take the car straight home, go right back to the beginning, and try a new route.  But I didn't say this.  I breathed in and out and just waited while the car idled.

I said to myself, "I can do this," and relaxed again.

I opened my eyes and looked at the house on the corner.  It had a couple of lawn ornaments—life-sized wild turkeys—adorning their front yard.  Seasonal, I thought.

Then the wild turkeys moved.  They were not lawn ornaments.  They were real pair of wild turkeys wandering in the middle of East Grand Rapids.  The male looked right at me—I could feel this—then he turned his attention to the female. He ruffled his feathers at her and splayed his tail apart, effectively doubling his size.  The female was nonplussed and wandered into the street.  The male followed behind her steps methodically, like a stalker.

"They should get out of the road!" MJ said as we pulled away, now having figured out our new route.  "They're going to get hit."

She dropped me at the rehearsal.  I would just walk in, sit for minute with some friends, blow into a harmonica, then come back out.  Therapy.

"You'll be okay?" she asked, knowing the answer.

I left the car, waved at her, walked around the corner on my own, and went inside.  Everything outside my house seems big and open, and this was no different.  I walked inside to see some familiar faces and answered the usual questions where I said how well things are going for me.  I took out my harmonica and sat between the oboist who is filling in for me and the harpist.

More questions about how I am doing.  ("Fine." "It's different." "Coming along slowly, but I'll get there," etc.)  But I was overwhelmed and had that feeling I was in an open sea with no corridors or familiar doors. My words were normal, but the harpist could see the water in my eyes.  I sat still in the chair, looking at the ground for a moment, trying to compose myself.  I was either going to faint, bolt or I had to find another way to deal.  I saw a hand—a woman's hand—the only anchor I could possibly conceive of right then, and I grabbed it.  The harpist stood suddenly and embraced me warmly while I shook it off.  I looked at her and said, "It's okay. I can do this. I'll be fine."  And right then I knew it too.

I sat through the piece, sitting amongst the musicians, listening to this gorgeous music around me, more beautiful than I had ever felt before—more real—and by the time my note came up I was feeling completely normal. I blew the chord on the harmonica and I guess it sounded like a harmonica.  I left and went back outside, where MJ was waiting in the car, now back from a quick errand.

She drove me home and made lunch.  After lunch it was time for Noah, our 9-year-old Newfoundland, to get his walk.  Until now it has not been part of my rehab to stray too far from the couch so MJ has done this part alone.  But I felt energized from my earlier success—spry, perhaps—and also I felt a casual stroll might do me some good.

She was not so sure.

"Seriously," I insisted. "I have a phone. It's just to the end of the block and back."  I thought some more and then said, "I can do this."

I got Noah's leash and a few plastic bags for another purpose. I hitched him up and opened the front door of our house.  Noah went down the steps and in no time we were halfway down the street, just the two of us.  It felt strange, kind of open.  In the past I would think of a dog walk as a straight line, a simple equation where you take your pet to a certain point, wait for him to do something, then come back.  But this felt very airy and open, very real for once.  I liked it, and the crisp autumn air and colored leaves added an ambience I could simply feel for once instead of having a theoretical appreciation for.  I felt so normal I took out my iPhone and posted a status update on Facebook: "Alexander Miller is walking his dog for the first time since neurosurgery (big step!) and it is beyond therapeutic."

Noah turned the corner and we went to the bottom of the hill on the next street. We crossed to the other side and began the return portion of the walk. Something about this made everything feel wrong, just plain wrong.  Things were upside-down and I couldn't get a handle on how everything corresponded to everything else.  I never felt in danger (like I would freak out or anything like that), just a general sense of malaise that the world was not ordered.  I was once again floating in the ocean.  I closed my eyes and tried to focus.  All I can say is I reached deep within myself and said, "I can do this," and opened my eyes again.

Noah didn't know.  He plodded along as he does every single time, expressing interest in the same trees, doing his "opera conductor" moments of "marking, marking, marking" (one of those musician jokes).  Noah pulled me forward, guiding me, not knowing my face was suddenly so flush I could feel wetness running down my cheeks.  He kept going forward as he does every time.

To someone watching me, they might not have noticed a thing out of the ordinary, but my mind continues to surpass these large hurdles as I continue my rehabilitation. 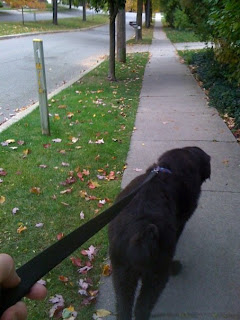 Posted by Alexander Miller at 5:19 PM

Email ThisBlogThis!Share to TwitterShare to FacebookShare to Pinterest
Labels: craniopharyngioma, dog, I can do this, newfoundland, recovery, tumor, walk

Noah: Metaphor of My Hidden Angst